By Caroline Dunning and Joshua Talib

“Our rainfall is changing, yet we need an encouraging method to show the benefits of new methods including using weather forecasts and new technologies”

Day 2 at COP comprised a mixture of events, starting with interviews, followed by a couple of side events, a plenary session on earth observation and climate change, concluding with a short talk at a side event on Decarbonisation for Defying Disasters. Interest surrounding COPbot is high, and the COPbot’s attendance at the side event run by the South-South Collaboration was a definite highlight for the organiser! 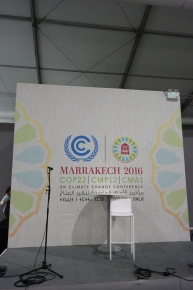 On the second day of COP22 we conducted several interviews. The first was with Martina Duncan the party representative from Grenada. She explained how most of her time at COP will be spent in negotiations and co-ordinating her delegation. Grenada are very keen to push for 1.5° global temperature rise over 2°C, and the Prime Minister was keen to ratify the Paris Agreement as soon as they were able. Martina, offered an interesting insight into the process of negotiations, and was keen to hear about what action was proposed and how they could work together for action. In the same manner as the Philippines, Martina expressed the need for mitigation and adaptation to support development. Currently, there energy balance is dominated by fossil fuels, with only around 5% coming from renewable sources. While they plan to include more solar, this will be done in a way to support local communities.

The second interview was with Andrzej Blachowicz and Germana Canzi from Climate Strategies. This is a network of around 70 researchers studying climate policy. Climate Strategies work to support these academics and enable collaboration, and see their role as producing the evidence and recommendations for policy. When asked about climate science, they said that climate policy and climate science are two completely separate areas; certainly a thought provoking statement for us. Climate Strategies do a lot of work in communicating their policy to relevant policy makers – they have a newsletter which highlights recent research findings, and occasionally run workshops and events with relevant stakeholders. While Andrzej was keen to highlight that they don’t campaign or pester policy makers, they do make an effort to effectively communicate their science to relevant bodies. The journal they have strong links with, Climate Policy, is doing a special issue on 1.5°C global temperature rise limit to support their upcoming report.

As research students we are keen to learn about where people get their information on climate science from. Martina Duncan uses organisations such as Climate Analytics and UNFCCC for climate information, but expressed her discontent with some of the information she receives, which is communicated in an unintelligible manner for the stakeholders she works with. Germana Canzi identified websites such as Carbon Brief and Climate Home as useful websites for climate information. Iyiola Isiaka Akande, a civil servant from the National Emergency Agency in Nigeria, said he had come to COP to find more information about climate change, and looking for collaborators on adaptation projects. His idea, was to run a farm experiment, where the farmer used forecasts in order to inform planting decisions. He hoped that this would lead to higher yields and thus other farmers would follow suit. He offered an interesting perspective, that information is not enough, people must see results in order to change.

The three interviews were fascinating, and we hope to conduct many more throughout COP!

Action to improve the nation’s resilience is failing to keep pace with the impacts of a warming planet and increasi… https://t.co/qAynpKeV8S

Are scientific models really as objective as we like to think and, if not, what do we do about it? A great article… https://t.co/DcwUxWoQi8

How do you analyse the impact of interventions in something as complex as food security? The development of 'storyl… https://t.co/SyA7CC93Em

We have some fantastic news: three members of the UoR community have been included as part of @TheSundayTimes Green… https://t.co/qlU12EnQe6

This week we have been working with the @UniRdg_OOCs team to build a new climate crisis course ready to launch in S… https://t.co/8WhBS23JoK