“No jobs on a dead planet” – Just Transition

What is Just Transition? Just Transition is about a transition to a sustainable future which ensures social, environmental and economic justice and fairness. It is about job creation, economic diversification, a low carbon energy future, investment in communities, respect for workers’ rights and human rights in general, a new social support system and co-operative action.

The message is that we need to work towards mitigating and adapting to climate change in a way which ensures that workers and communities are not left behind. The goal is a zero carbon, zero poverty future.

Trade Unions are playing a key role in making the voices of workers and communities heard in climate change policy discussions. They are fighting to ensure a Just Transition to a sustainable future.

An example of where the role of Trade Unions is key is in South Africa, where there is a lack of jobs, crumbling infrastructure, high levels of poverty and high reliance on the coal industry. South Africa is also one of the most unequal countries in the world. Resources should be used sustainably while building prosperity and equity. Workers and communities need to represented in discussions about how resources will be allocated.

On the other hand, there are success stories. An Australian state has generated a renewable energy plan to reach 40% renewable energy and create 10,000 new jobs by 2025.
Overall, there is a need for fast, fair and deep action. This should not be left to deregulated “free” markets which have created environmental and economic crises and a lack of sustainable industrial strategy in the past. Planning is key and is needed urgently to ensure a Just Transition is possible.

Climate change is not an environmental issue alone, but fundamentally a social issue. As observed by Brian Kohler from IndustriALL Global Union, a global association of private sector and industrial unions, “we cannot accept a just transition towards an unsustainable future and we cannot accept an unjust transition to a sustainable future”.
Interview

To find out more about some of the climate change challenges being faced, we spoke to Buyiswa Ndibango from the Department of Environmental Affairs in South Africa. Analogous with Just Transition is Just Adaptation, which is key in South Africa to building resilience in local communities. However, many social issues remain, which sometimes push climate change lower down the agenda. In addition, education about climate change is lacking in many South African communities. The government needs a top-down approach for educating the public and shifting the focus onto climate change.

What is Sustainable Development Goal 17?

SDG17 is, in the language of the UN, to “Strengthen the means of implementation and revitalize the global partnership”. In everyday language, this means that efforts will be made to bring together government, the people they govern and the private sector to work towards the common goal of meeting all the SDGs. After all, it is in all of our interests to ensure that the path we are travelling along will not lead us over a cliff edge.

So how are institutions going to meet this goal?

To find out we interviewed Tania Oseja Carillo, a Climate Adaption Specialist for the World Food Program. She talked about the work that the WFP is doing in Tanzania and Malawi to communicate weather information to farmers. This involves translating the information into a form that is easily comprehensible to the farmers, and getting it to them via weekly radio programmes and SMSs. It also connects the farmers to experts, through being able to phone the radio programme free of charge to have their specific questions answered. 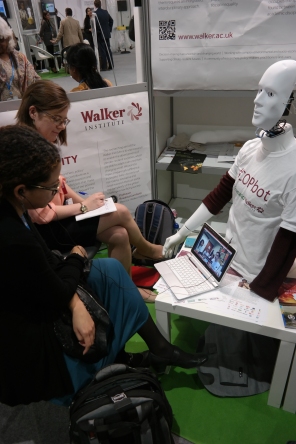 In a side session “SDG17: Science for informed mitigation and adaptation choices”, Phil de Cola, who works for the Sigma Space Corporation, set out the case that greenhouse gas emissions must be monitored in far more detail to provide better estimates of inventories of emissions from each country. If this can be done in such a way that is useful to the country, then it far more likely that the information will be used and acted upon, instead of used as solely a means of monitoring that country’s emissions. The monitoring can be used, for example, to detect large leaks of methane, which in turn can provide the “low hanging fruit” of climate mitigation. This makes it easier for countries to meet the pledges that they have made as part of the Paris Agreement, through working with cities and private companies to help reduce these emissions.

In the same session, Libby Jewett, director of NOAA’s Ocean Acidification Program, spoke about how she had brought together scientists, industrial owners and biologists to solve a mystery: “The case of the shrinking oyster larvae”. High concentrations of CO2 in the atmosphere, which were being transported into the oyster farms by seasonal currents, were causing the death of these tiny larvae. After the reason behind the death of these creatures had been solved, a plan could be put in place to protect these larvae when one of these events was forecast to happen, using a buffer in the water to reduce its acidity.

Overall, these markedly different examples show that there is no one way to meet SDG17. However, each example paints a picture of how SDG17 can be a useful way of attacking wide-ranging problems, and coming up with solutions that are beneficial to all of the partners involved.

The @FCFAhycristal project have recently published country profiles, covering our activities during the project for… https://t.co/vxMo0KHQip

We spoke to @ChloBrim about her PhD project which looks at #heatwave events across Africa, which have the potential… https://t.co/LtT0fNK3y4